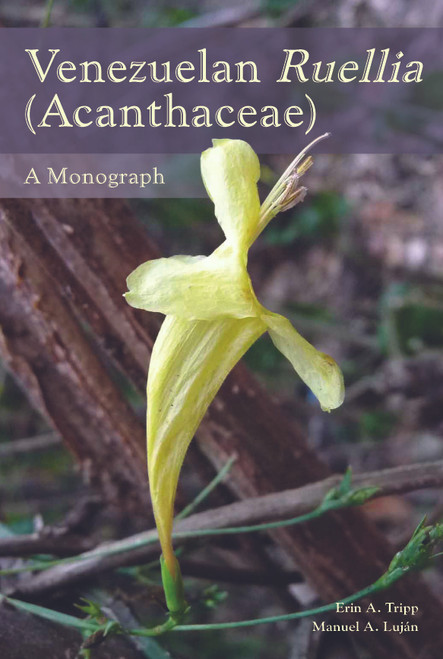 The Acanthaceae are among the 10 or so most taxonomically diverse families of flowering plants. Taxonomically, northern regions of the Neotropics including Mexico and much of Central America have been studied to a greater degree than have more southerly regions of the Neotropics including most of South America. In particular, the Acanthaceae biotas of Venezuela and Colombia are believed to be particularly rich as well as home to numerous endemics. Recent fieldwork by the authors in both countries has yielded some of the first targeted, modern collections of the family since the mid-twentieth century and has made possible a focused taxonomic study of Ruelliaâ€”the second most species-rich genus of Neotropical Acanthaceae.

The present study contributes a taxonomic revision of the 29 species of Venezuelan Ruellia, including in-depth assessments of type material for all names, new typifications, extensive discussion of taxonomy, biogeography, and ecology of species; field photographs of species and habitats and botanical illustrations of species not previously illustrated; International Union for Conservation of Nature (IUCN) conservation assessments (for the 13 endemic species only); ArcGIS-based maps showing geographical distributions as well as protected areas; and dichotomous keys to facilitate identification of all 29 species. Most collections of Ruellia derive from regions of Venezuela not currently contained within a protected area. Of the 13 endemics, three were assessed as Critically Endangered, five as Endangered, two as Vulnerable, one as Near Threatened, one as Data Deficient, and one as Extinct. Thus, all but four are at severe risk of extinction in the wild, highlighting the growing crisis around habitat destruction in the Neotropics.
×