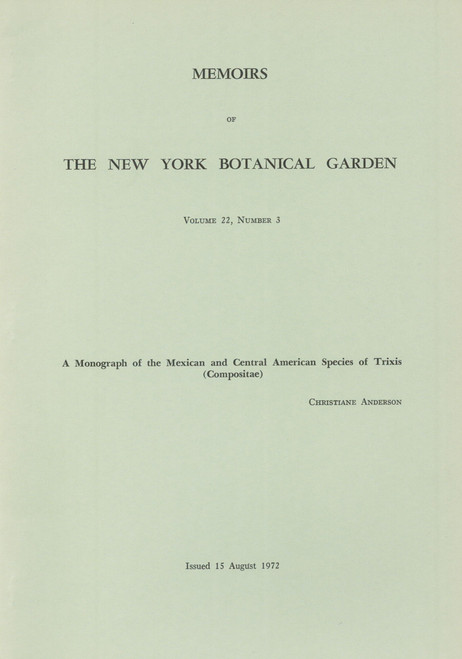 All of the species treated in this volume are frutescent perennials with horizontal underground stems. The genus Trixis of the Compositae (tribe Mutisieae, subtribe Nassauviinae) has two centers of diversity, one in southwestern Mexico and one in the area of northern Argentina, Uruguqy, and southern Brazil. The genus has never been studied as a whole. The two groups come into contact only in southern Central America and in the West Indies, where the ranges of the widespread T. inul and T. divaricata overlap. Includes keys, descriptions, and distribution maps.
×

A Survey of Foliar Flavonoids in the Aceraceae. Mem (54)

A Revision of the American Species of Rourea Subgenus Rourea. Mem (26)1

A Systematic Revision of the Genus Cybianthus Subgenus Grammadenia. Mem (43)

A Taxonomic Revision of the Genus Macrolobium. Mem(8)4