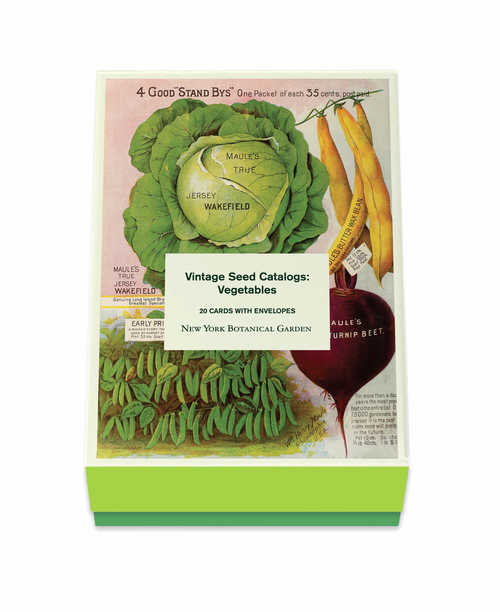 William Henry Maule (1858-1913) took over his father's lumber and seed company in 1882. Soon afterwards, he came up with the idea of publishing a colorful illustrated catalog to promote the great variety and quality of his company's products. In 1889, instead of marketing to dealers, he targeted the customer directly with mail order and he conceived the notion of giving away sampls and cash prizes. His firm enjoyed nationwide success and distributed five million catalogs within the next decade.

The covers of many of Maule's catalogs feature luscious vegetabl images calculated to appeal to home gardeners and rural farmers alike. A boost in sales was brought about by the victory garen movement developed to assist the war effort, the rise of school gardening progrsm, surburban housing developments and a burgeoning urban immigrant population in the early twentieth century who wanted to grow their own foods.

Product Details:
20 folded cards with envelopes
4 each of 5 designs
×