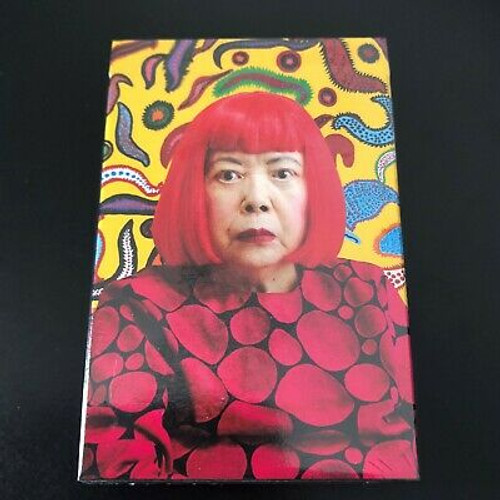 The paintings after which the deck is named are a series of paintings begun in 2009 called, “My Eternal Soul.” In 2017 Kusama had an exhibition at the Hirshhorn Museum in Washington, which featured this description of her and the “My Eternal Soul” series:

“Begun in 2009, My Eternal Soul currently comprises over five hundred works. Kusama has said that through this series, she hopes to trace the “beauty of colors and space in the silence of death’s footsteps and the ‘nothingness’ it promises.” Within these paintings, which embody both the radiance of life and the sublimity of death, motifs from Kusama’s earliest works are often echoed, giving evidence to the singular vision that has driven her over the course of her long career. The effects of color vibration and exuberant patterning, for instance, are reminiscent of Kusama’s works on paper from the 1950s and 1960s. And, like her Infinity Mirror Rooms, which are simultaneously enclosed and expansive, colors and patterns pulsate within the bordered spaces of these canvases. The pattern of peering eyes is consistent with her tendency toward obsessive, endlessly proliferating images, and the voyeuristic pattern transforms flat color fields into shadowy depths. Other biomorphic forms, some resembling microorganisms, populate Kusama’s strange landscapes, and titles such as Aggregation of Spirits suggest that these paintings may be surrogates for human souls.”