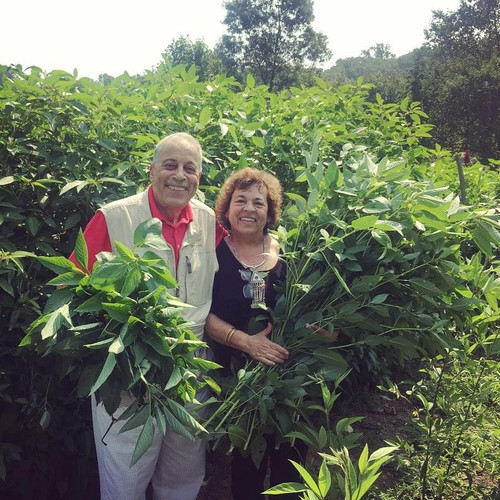 Molokhia is a beloved green is rich in vitamins and minerals and eaten like spinach in the Middle East, North Africa, and East Africa. It is usually eaten chopped up in a soup or stew, adding thickness to the broth. It is mucilaginous like its mallow-family cousin, okra. It is also known as Egyptian Spinach, Jew’s Mallow, Jute, Saluyot, Lalo, Ewedu, and Okra Leaf, and used as a fiber for making twine, rope, and rugs.

This variety comes from our friend Anan Jardali Zahr. Anan has given me seeds from her homeland of Palestine, including this Molokhia (or Mlukhiyie, as she calls it). When she later came to harvest the greens at our farm with her husband George, she told me our plants are much taller than how they’d be in Palestine, perhaps because of our increased precipitation, and perhaps because we have not been steadily harvesting it for greens since we are growing it for seed. Anan and I met at an event in the Culinary Literacy Center at the Free Library of Philadelphia. We were co-presenting about Sumac and Za'atar, but really I played a minor supportive role as she led a terrific cooking workshop in the teaching kitchen. She had a Mediterranean restaurant for many years and is a passionate chef focused on Palestinian cuisine as well as a dedicated community activist on local and national issues. She removes the Mlukhiyie leaves and freezes them for the winter, since the leaves do not dry down as well in Pennsylvania as they would in Palestine or the Central Valley of California where she grew up working as a young farm worker in the time of Cesar Chavez. Thank you Anan and George!
×

NYBG Around the Table Poster