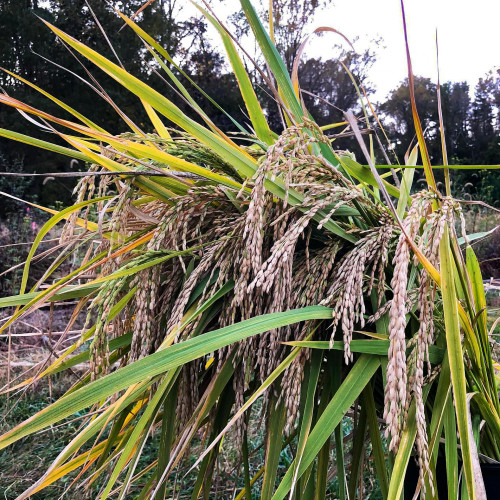 Also known as red bearded upland rice, this special dry-farmed rice has a deep and important history in all parts of the twin islands of Trinidad and Tobago. We grow this rice at Truelove Seeds with limited irrigation with individual plants or several per clump spaced 8-12” apart. This particular selection comes from communities on the south coast of Trinidad, including Moruga. Our original seed came from our dear friend and seed keeper now based in Trinidad who shared this history with us:

Similarities in rice strains and cultivation practices can be used to trace the movement of peoples and plants from specific regions from Africa to the Americas. This very special rice may have been brought to Trinidad via Black soldiers in the war of 1812 who were sent to Trinidad as payment for services by the British army. They were given virgin land in southern Trinidad and after fighting in a war and being uprooted from the American south, they had to learn to cultivate this new land using the knowledge and strength passed down to them. Those soldiers, their families and their cultural ways persevered.

There is evidence that rice predates this history in Trinidad, and it is difficult to trace where this particular strain (one of dozens from the region!) enters the story, but it is certainly a living piece of an African Diasporic tradition of rice cultivation in the Americas.
×

NYBG Around the Table Poster

NYBG Around the Table Magnet

NYBG Around the Table Mouse Pad

Watermelon and Red Birds: A Cookbook for Juneteenth and Black Celebrations