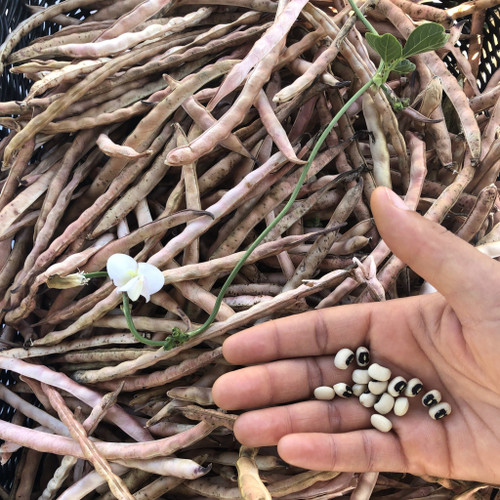 Plump cream-colored peas with big, beautiful black eyes grow 10-15 to a pod on lovely, productive, and vigorous 6-foot-tall vines with white flowers. The tender young pods are a tasty treat in the garden, though these are primarily grown for shelling when fresh or dried.

We received these seeds from seed keeper extraordinaire Kris Hubbard, of Artemus, Kentucky, who has travelled the Appalachan hollows as a healer, ethnobotanist, and educator for decades, collecting seeds and stories along the way. The Ezelle family is originally descended from Mali, West Africa. They were first enslaved on a plantation in Hahnville Parish, Louisiana from 1820-1860s. They were later split up and some were relocated to Chickasaw County, Mississippi. Kris received these seeds in the early/mid 1990s from an old-timer in his 80s named Ezelle who had married a Choctaw woman Kris knew. Mr. Ezelle said his grandmother had carried the pea from Louisiana by placing a few into a wilted leaf tucked under her hair. His mother who called the pea "Fish Eye" cared for them until he had his own garden.

NYBG Around the Table Tote Bag

The Africa Cookbook: Tastes of a Continent

We Are What We Eat: A Slow Food Manifesto