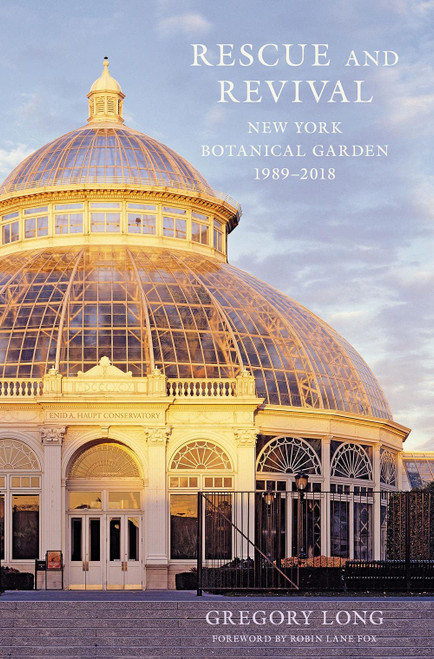 By the late 1980s, the New York Botanical Garden was in serious trouble. The staff were poorly paid and balkanized, endowments were depleted, fundraising was inadequate, and visitation had dwindled to an embarrassing level. The grounds were seedy, many of the historic buildings decrepit, and the great conservatory in need of total rehabilitation. The fundamental concept of a botanical garden as an educational institution and museum of plants had been forgotten by all but a few. The once distinguished place, founded in 1891, was in need of a revival. Enter Gregory Long, a new CEO brought in from outside the botanical world with a mandate to rescue it. This is the story of how he did.

Twenty years' experience at four major New York cultural institutions, including the Metropolitan Museum of Art and New York Public Library, together with an extraordinary energy and imagination, equipped Long with a vision for how to turn things around. He set about recruiting new senior staff, rebuilding the board, reengaging employees, and fundraising on a vast scale. The massive billion-dollar program of renewal, modernization, and expansion he and his staff implemented was realized through four successive strategic plans, resulting in the restoration of the historic landscape, creation of new programming, and construction of many new facilities and gardens. By 2018, NYBG had been reestablished as one of the city's major cultural institutions and was recognized as the most important privately funded botanical garden in the world.

The account of this decades-long, painstaking yet exhilarating process is engagingly told here through dozens of episodes and many protagonists. As diverse as New York City itself, this cast of characters includes the biologists Edward O. Wilson and Thomas Lovejoy, philanthropists Brooke Astor and David Rockefeller, author Oliver Sacks, Karen Washington and the urban farmers of Bronx Green-Up, Senator Patrick Moynihan, and performing artists Sigourney Weaver and Jessye Norman. The efforts of these and hundreds of others, staff and volunteers, were critical in the rebuilding of this international institution during what now seems a golden age in New York City history.

The renaissance of the New York Botanical Garden is a success story that will inspire readers everywhere, from those who steward their own nonprofit organizations to those whose lives have been enriched by the beauty and educational impact of this remarkable place.
×

NYBG Around the Table Shirt