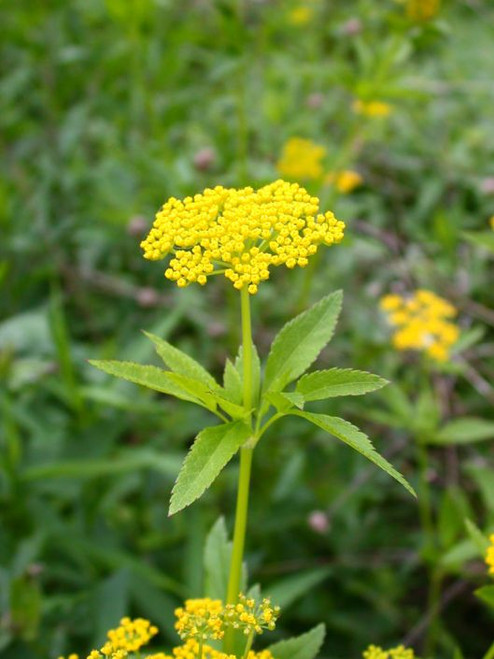 Zizia aurea is one of those natives that every garden should have. It is fairly easy to grow and, although short-lived, will self-seed and persist in many sun/soil situations. Zizia is an important plant to a number of short-tongued insects that are able to easily reach the nectar in the small yellow flowers. Black Swallowtail and Ozark Swallowtails caterpillars will feed on its leaves.

Golden Alexanders have a long bloom time, giving the garden/prairie some well-deserved early color for several weeks in late spring to early summer when many other plants have not yet flowered. Also called Golden Zizia, Golden Alexanders will tolerate a lot of shade but prefer full sun or light shade.

Zizia is a member of the Carrot (Apiaceae) family with yellow umbel flowers. Our website also features the following species with similar blossoms: Taenidia integerrima (Yellow Pimpernel), Polytaenia nuttallii (Prairie Parsley) and Thaspium trifoliatum (Meadow Parsnip). Of course Zizia aptera (Heart-leaf Golden Alexanders), is most similar and could be difficult to distinguish from Zizia aurea were it not for the heart-shaped leaves at the base of the plant. Heart-leaf Golden Alexanders can endure drier soils also.

All of these important perennial native plants should not be confused with the similar-looking Pastinaca sativa (Wild Parsnip), a highly invasive Eurasian biennial commonly found on roadsides and other disturbed sites. Wild Parsnip is taller than the aforementioned natives, blooms later and can cause painful skin burns.
×

2023: A Year in Botanical Art Calendar