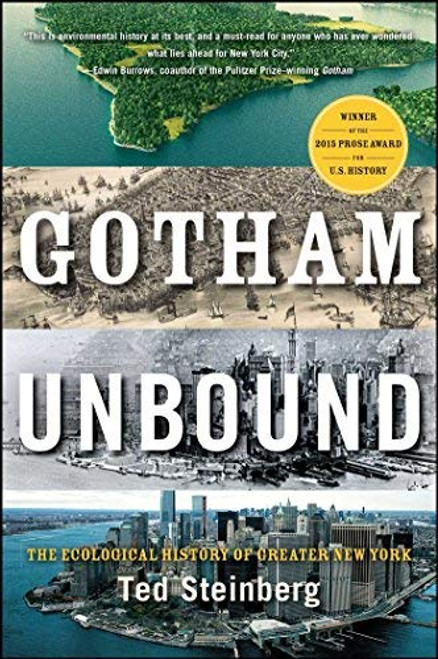 Gotham Unbound recounts the four-century history of how hundreds of square miles of open marshlands became home to six percent of the nation’s population. Ted Steinberg brings a vanished New York back to vivid, rich life. You will see the metropolitan area anew, not just as a dense urban goliath but as an estuary once home to miles of oyster reefs, wolves, whales, and blueberry bogs. That world gave way to an onslaught managed by thousands, from Governor John Montgomerie, who turned water into land, and John Randel, who imposed a grid on Manhattan, to Robert Moses, Charles Urstadt, Donald Trump, and Michael Bloomberg.

“Weighty and wonderful…Resting on a sturdy foundation of research and imagination, Steinberg’s volume begins with Henry Hudson’s arrival aboard the Half Moon in 1609 and ends with another transformative event—Hurricane Sandy in 2012” (The Plain Dealer, Cleveland). This book is a powerful account of the relentless development that New Yorkers wrought as they plunged headfirst into the floodplain and transformed untold amounts of salt marsh and shellfish beds into a land jam-packed with people, asphalt, and steel, and the reeds and gulls that thrive among them.

With metropolitan areas across the globe on a collision course with rising seas, Gotham Unbound helps explain how one of the most important cities in the world has ended up in such a perilous situation. “Steinberg challenges the conventional arguments that geography is destiny….And he makes the strong case that for all the ecological advantages of urban living, hyperdensity by itself is not necessarily a sound environmental strategy” (The New York Times).
×

Nature's Best Hope: A New Approach to Conservation that Starts in Your Yard

Liverworts of New England: A Guide for the Amateur Naturalist. Mem (99)