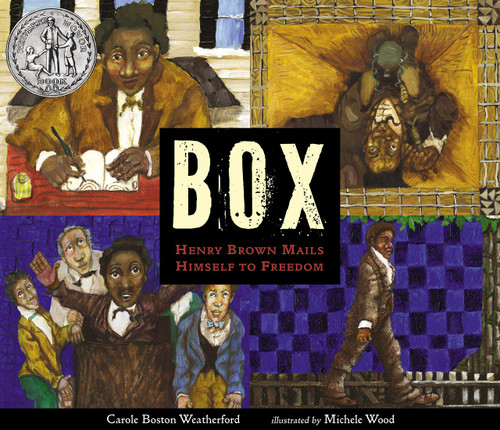 In a moving, lyrical tale about the cost and fragility of freedom, a New York Times best-selling author and an acclaimed artist follow the life of a man who courageously shipped himself out of slavery.

What have I to fear?
My master broke every promise to me.
I lost my beloved wife and our dear children.
All, sold South. Neither my time nor my body is mine.
The breath of life is all I have to lose.
And bondage is suffocating me.

Henry Brown wrote that long before he came to be known as Box, he “entered the world a slave.” He was put to work as a child and passed down from one generation to the next — as property. When he was an adult, his wife and children were sold away from him out of spite. Henry Brown watched as his family left bound in chains, headed to the deeper South. What more could be taken from him? But then hope — and help — came in the form of the Underground Railroad. Escape!

In stanzas of six lines each, each line representing one side of a box, celebrated poet Carole Boston Weatherford powerfully narrates Henry Brown’s story of how he came to send himself in a box from slavery to freedom. Strikingly illustrated in ric
×

Out of Wonder: Celebrating Poets and Poetry

Julian is a Mermaid

High on the Hog: A Culinary Journey From Africa to America